Before the entrance doorway to the ashram, stands a Ganesha idol, hands wide open in welcome. As a mark of deep reverence, placed inside,are the pair of sandals (padukam) and the portrait of the youthful Swami Chimayananda who is the spiritual Guru and the inspiration for Swami Sandeepananda Giri, the founder of School of Bhagavad Gita. 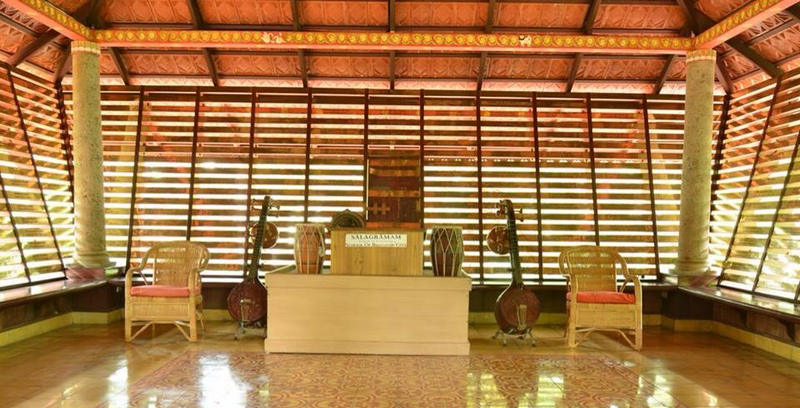 A synonym for Salagramam Ashram is ‘Temple of Knowledge’ – the concept that it seeks to purport. At the heart of this beautiful building is the Gita Kshetram, standing as it were, a visible expression of this noble concept. For, it has the entire Bhagavad Gita aesthetically engraved on its walls. Exhibiting the ethnic architecture of Kerala, the Gita Kshetram is modeled on the lines of a ‘koothambalam’. All 701 slokas in the 18 chapters of the Gita are engraved on brass plates on the wooden reapers that constitute the walls, in typical Kerala style, using eco –friendly materials. 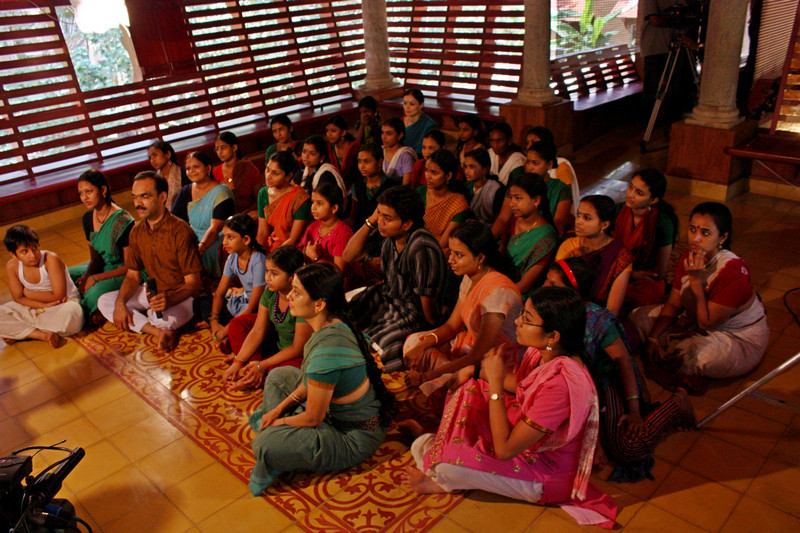 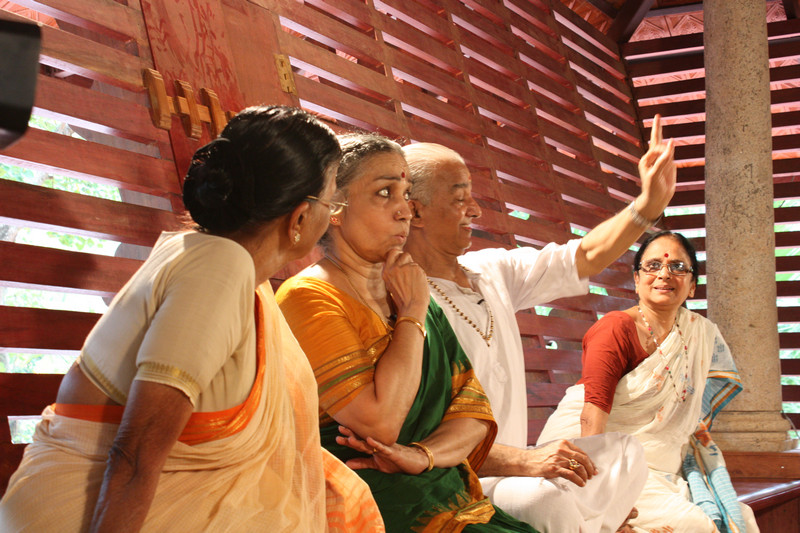 This venue is meant to be an open forum to all seekers, for kindling creativity and free thinking and to equip them with the knowledge to lead a practical life that is rooted in the universal values as outlined in the Bhagavad Gita. 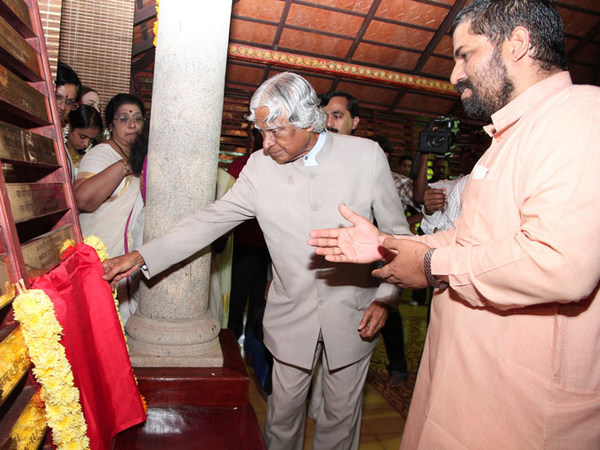 This unique structure radiating a regal beauty all its own, is probably one of its kind in the country, or even the world, perhaps. Fittingly, it was inaugurated by none other than Dr. A.P.J Abdul Kalam, former President of India and a much respected global citizen.

Programmes and events held in the Gita Kshethram include discussions between spiritual and cultural gurus and students, poets’ meet, music and dance. 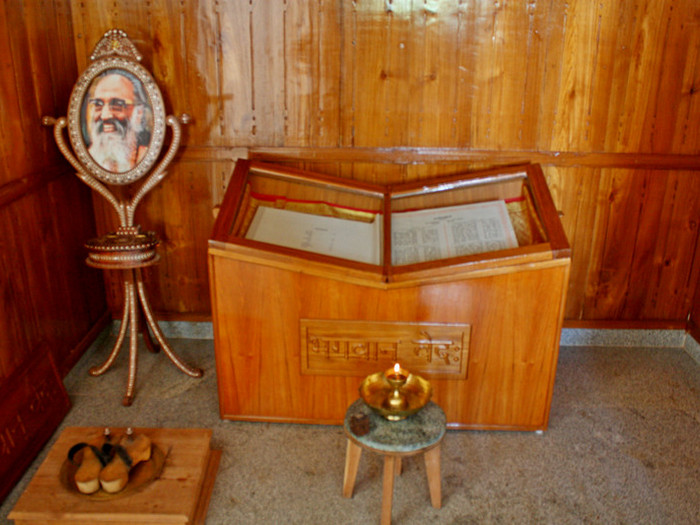 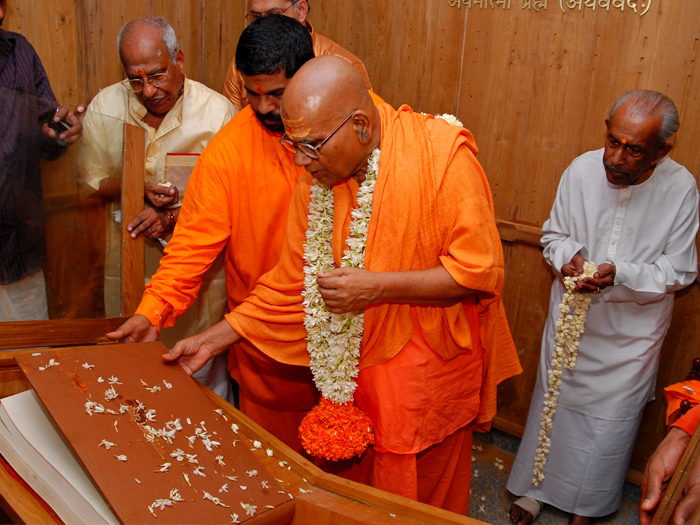 Veda is Knowledge. So for the Temple of Knowledge, the symbolic idol to be worshipped is befittingly the Vedas. Veda Bhagavan, the sacred book containing the four Vedas – Rg, Yajur, Sama and Atharva- is enshrined and given place of honour in Salagramam. The four mahavaakyams (Great axioms) of the vedas – Prajnanam Brahma (Rg) Aham Brahmasmi ( Yajur), Tatvamasi (Sama) and Ayam Atma Brahma (Atharva) are engraved in brass on the wall. Veda Bhagavan had been installed by Maharaja Uthradam Tirunal of Travancore and consecrated by H. H. Swami Kashikananda Giriji Maharaj. 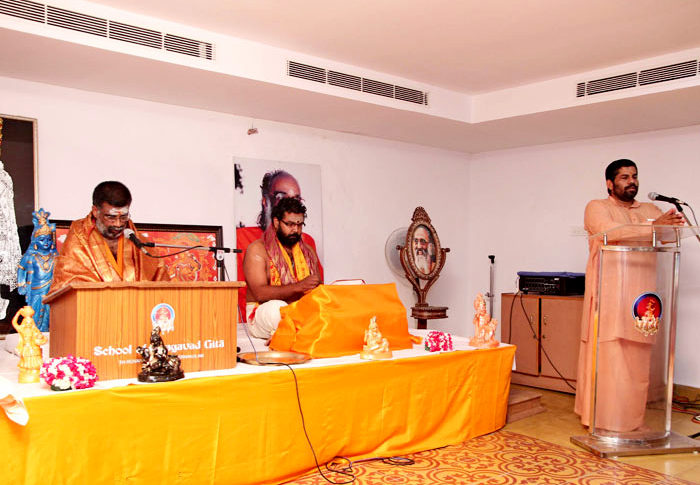 Naimisharanya is the hall for satsangs, talks, discussions and meetings. It is named after the ancient place “ Naimisharanya, the blessed spot where sages did penance, wise men gave discourses, many puranas were written and where Sri Suka narrated the Bhagavadham to Maharaja Parikshit. 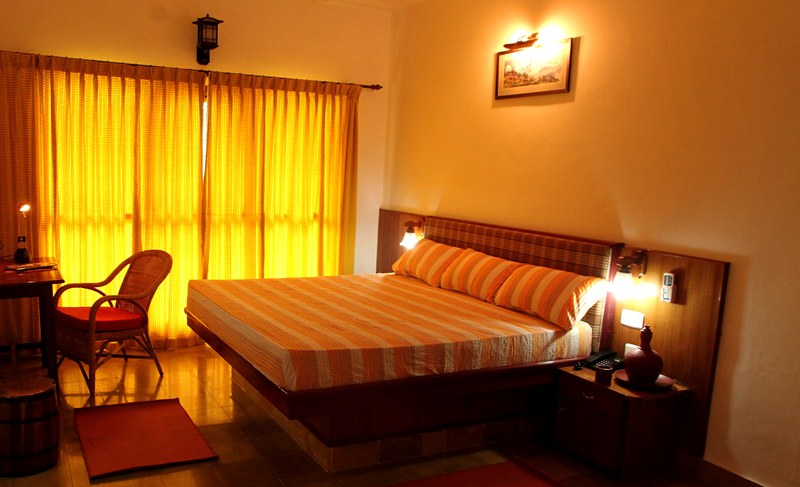 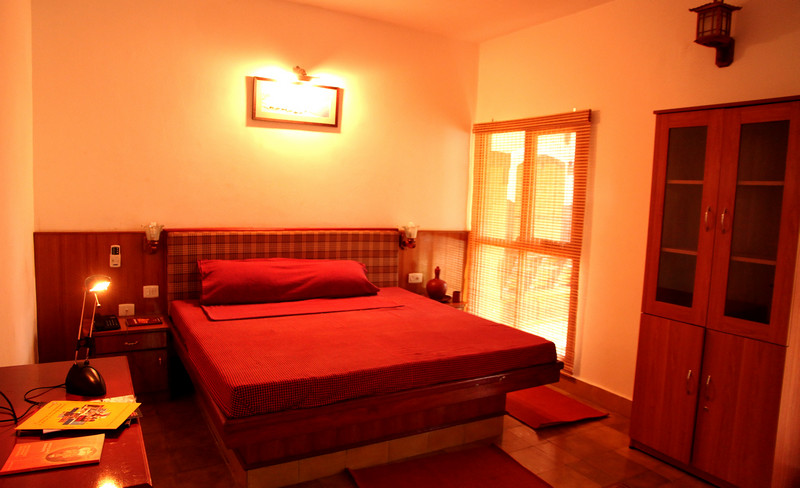 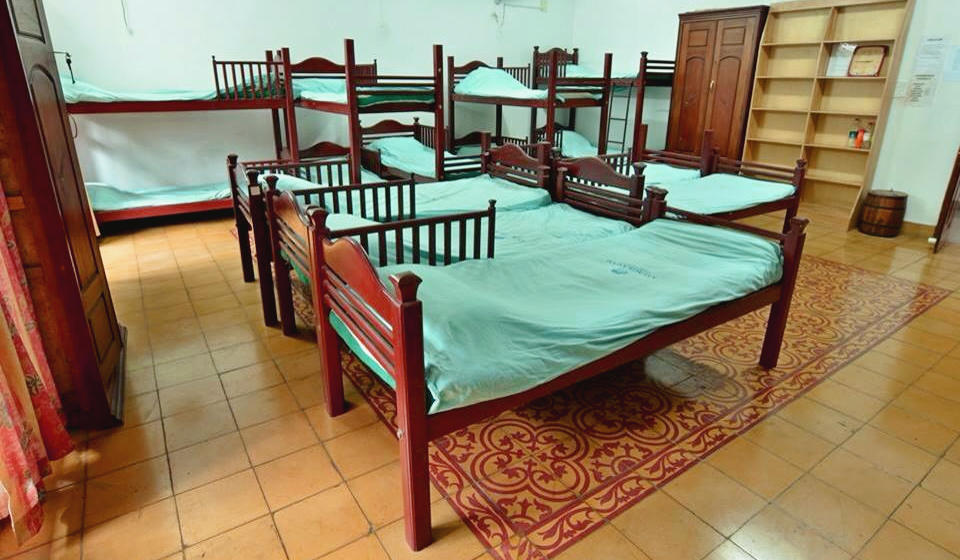 4 well-appointed double rooms – Gangotri, Yamunotri, Kedar and Badri- are available for guests. All have toilets and baths attached. The rooms have air-conditioning which may be optionally used. Two of the rooms overlook the river.

There are also 2 dormitories – Nachiketa and Mitra Vinda- that can each sleep 15 people. Both dorms have attached shower cubicles and toilets.

All facilities in the rooms and dorms match international standards.

A well-stocked library with over 2000 books mainly on culture, heritage and spirituality, is available for reference and reading on campus. 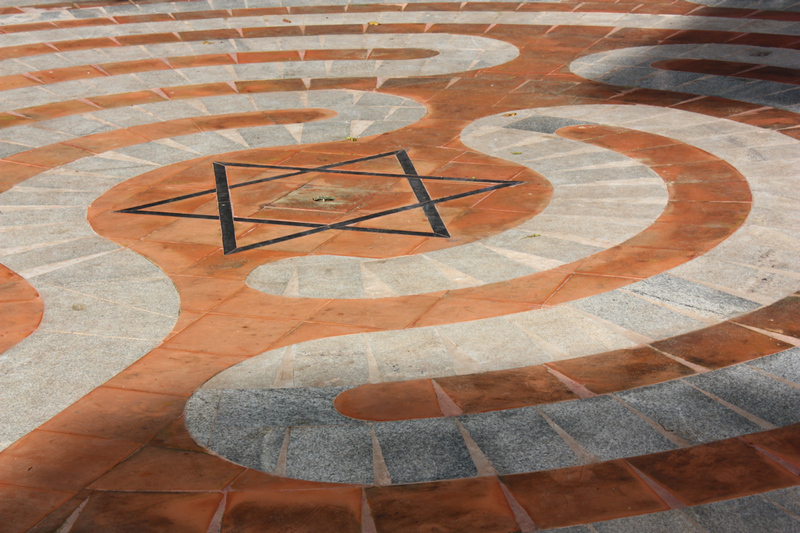 Sapta Bhumika ,the labyrinth (maze) is designed to enable “walking meditation”. The winding paths lead to the point inside and symbolically, this is meant to be an inner journey to the Self.